This is an in-depth analysis of the ‘human systems’ that uniquely distinguish the Toyota Motor Corporation from virtually every other organization on the planet.

– The Heart and Soul of the Toyota Way

What is it about?

This is an in-depth analysis of the ‘human systems’ that uniquely distinguish the Toyota Motor Corporation from virtually every other organization on the planet. Processes and Process Improvement is put in context of the sustaining elements of a continuous improvement culture . The focus in on the “ people value stream” as much as it is on the process value stream.

Structured in five parts – Liker and Hoseus analyze the various inter-related components of the Toyota focus on people and culture.

Part One – What is Toyota Culture?

Part Five – Learning from Toyota about growing a Lean Culture

The contrast between traditional Six Sigma or Lean deployments and the “Toyota Way” is introduced in Chapter One and rounded-out in the final part of the book. The general focus on methods and improvement initiatives goes some way to explaining why there are so few examples of true business transformation outside of Toyota. Process methods and technologies alone will never result in sustained change.

While based on a manufacturing environment, the key success themes of the Toyota Motor Company are a valuable insight into the more systemic elements of sustained, ongoing improvement for any organization. Understanding the principles of the Toyota Way and appreciating that the company-wide culture is the sustaining ingredient of operational excellence for Toyota are a sharp contrast to the crisis-driven, short-term solutions sought in many businesses today. The insights of this book are as deep and lasting as is Toyota’s global success. It is a long journey. This book will frustrate many as they come to realize that they will not be able to emulate Toyota’s success quickly through methods and technologies without first having established a strong culture of continuous improvement. That in itself is a reason enough to read it and ensure that your manager does too. 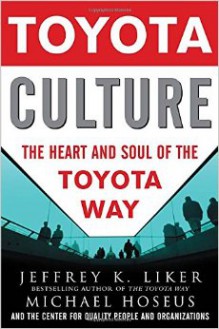